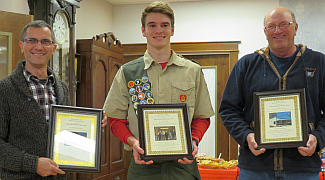 President Kurt Garner conducted a brief business meeting which included the election of officers and approval of the 2018 budget.  The slate of candidates approved was the same as this year: Garner as President, Scott Schuster as Vice-President, Paul Schoberg as Treasurer and Portia Wampler as Secretary.  The council unanimously approved the administrative account totaling $1,320; the Summit School and Jacoby Church Project budgets totaling $1,200 each and $1,400 in a budget for Special projects.

Emphasis of the annual meeting is the awarding of the Daniel McDonald Awards for restoration and preservation.  McDonald was the first historian in Marshall County and wrote much of the county’s history. 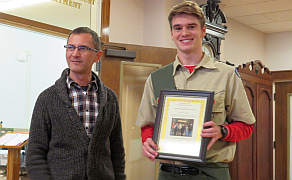 Three awards were presented by the Wythougan valley Preservation Council.  Daniel Stauffer was presented with the award for his Eagle Scout project at the Marshall County Memorial Forest.  His project created a parking area and an information board detailing the history of the forest that was created to honor the veterans. 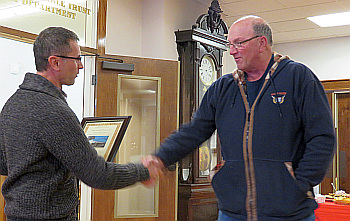 A second McDonald Award was presented to Kevin and Melodie Overmyer for their work restoring the old grocery building in Burr Oak.   This summer the Overmyers cleared out the building, and restored it into the Burr Oak Whistle Stop, a store selling antiques, collectables, painted furniture, jewelry, candles, signs, clothing and more. 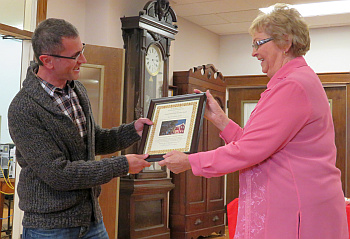 The final restoration and preservation award was presented to Kurt and Christine Garner for the work on the Robert Schroeder House now known as Sycamore Hill.  The Garners have spent several years restoring the home they live in with their two children.  They were able to finish the restoration work earlier this year.