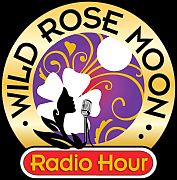 The Wild Rose Moon Radio Hour has been moved to a new primetime slot on WVPE 88.1 FM.

The new broadcast of the show will be the first Monday of every month at 9 p.m. The first broadcast will feature John Kennedy of Kennedy’s Kitchen fame and premiers this Monday, December 4th.  The Show also broadcasts on WTCA 1050 AM & 106.1 FM, the first Saturday of the month, or December 2nd at 12 noon.

Wild Rose Moon Radio Hour is recorded before a live audience in The Little Moon Theater, a sound stage located beneath the Wild Rose Moon Concert Hall.  Look for announcements of upcoming recordings times and come be part of the show.  Tickets are available at ASK for Flowers, Wagoner’s Music, and at Wildrosemoon.com.