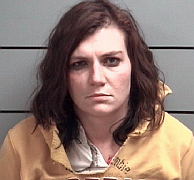 On Tuesday, November 21st at approximately 1:00 PM the Marshall County Sheriff`s Department was made aware of a possibly impaired driver. The suspect vehicle was located by Deputy Smith and a traffic stop was conducted on Oak Road at 7th Road.

After an investigation, 30 year old Chantell Sitek of Knox was taken into custody for operating a vehicle while intoxicated.  It was also determined that Sitek was in possession of a schedule four controlled substance.

Chantell Sitek was lodged in the Marshall County Jail, held on a $1,500 cash bond and given a Superior Court II date of December 12th for her initial hearing.