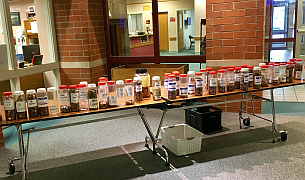 The Riverside Intermediate School student council’s annual Penny War for the Marshall County United Way is officially over. This is the 12th year that Riverside has held the Penny War.

Rockets put pennies into their class jars to earn points. Students were able to drop silver coins and dollars in competing classroom’s jars to “bomb” or take points away from those other classes. For example, a quarter takes 25 pennies away. The winning class, from each grade level, are the classes with the most positive points. Those classes will win a pizza party. However, the real winner is the United Way because all of the money will be donated to our local Marshall County chapter!