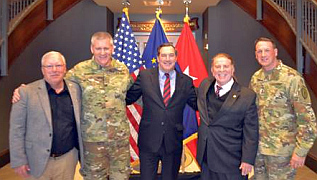 Donnelly said, “The Jacob Sexton Military Suicide Prevention Act has been implemented across our Armed Forces this year, including by the National Guard, and I am hopeful it will make a difference and help end the scourge of military suicide. Mental fitness, like physical fitness, is a critical component of military readiness. This law, for the first time, requires an annual mental health assessment for all servicemembers, including members of the Guard and Reserves.  The goal is to better identify those struggling with mental health issues and ensure they receive the help they need before it’s too late.”

Major General Carr, Adjutant General of Indiana National Guard, said, “Senator Donnelly’s Jacob Sexton Military Suicide Prevention Act has provided the Indiana National Guard a foundation to work from to identify Soldiers and Airmen who are in need of help and provide the resources as quickly as possible. Seeking help is a sign of strength, and we will continue to encourage help-seeking behavior while ensuring the resources are available so that our servicemembers can continue to serve proudly and be ready when needed.”

Major Edwards, Chief Behavioral Sciences Officer of the Indiana National Guard, said, “The Jacob Sexton Military Suicide Prevention Act has increased access for servicemembers to mental health services. It is a smart move to leverage key opportunities to monitor the mental health status of our servicemembers. Every year we check servicemember’s health status with a physical exam and now behavioral health questions are a bigger part of that annual screening.  We’re proud to say that the Indiana National Guard has fully implemented the Sexton Act. We’re thankful for the provisions of the Sexton Act and to Senator Donnelly for his unwavering support of the military. ”