Butler Arrested for Domestic Battery and Meth in LaPaz 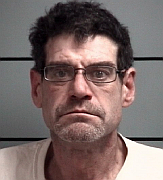 Last Tuesday, November 21st Marshall County Police arrested a LaPaz man after a report of domestic violence was reported to 911.

Just before 5 p.m. Marshall County Police and ISP Troopers were dispatched to the 200 block of Vandalia Avenue in LaPaz for a domestic battery.

Following an investigation, 53 year old Mark Butler of the Vandalia Street address was arrested for Domestic Battery, Dealing in Methamphetamine, Possession of Methamphetamine and Maintaining a Common Nuisance.