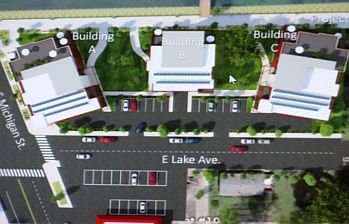 On Monday night the Plymouth City Council took the first step it the tax abatement process for the River Gate South residential housing development at South Michigan and Lake Streets.

A public hearing will be held at the next city council meeting on Monday, November 27th for the tax abatement.

While at the meeting Sivan took time to update the council on the project. The pedestrian bridge that will be part of the Greenway Trail is expected to the installed by mid December.  Underground work for the drainage and storm detention systems is being done now and they’ve done tree clearing on the east end of the site so the residents will be able to see into River Park Square.

The developer said they are a little behind schedule but that’s to be expected this early in the project.  He said they still plan to be open by late spring or early summer 2018.