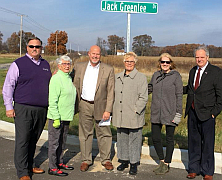 During the ceremony Senter said, “We are here today to honor a man of character, a legend of Plymouth…Mayor Jack Greenlee.” (1992-2000)   Greenlee also served as a Marshall County Councilman and a Plymouth City Councilman.

Mayor Senter noted Jacks involvement in the community while his wife Jenny said, “Jack loved being the mayor and serving the community.  He always had a smile and was joyful”

Former City Attorney, Nelson Chipman was at the ceremony and said, “I loved working for him and every day was a different day. This is a very fitting tribute to him.”