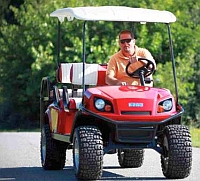 Last week a county a local resident appeared before the Marshall County Commissioners asked them to consider a revision of the current golf cart ordinance to omit the road speed limits as a determining factor on where golf carts are permitted.

Michelle Bachtel told the commissioners she lives near Inwood and often uses a golf cart to go back and forth between the property she owns on the north and south sides of U.S. 30. She was recently stopped by a county police officer who informed her that she couldn’t drive the golf cart on the county road because the speed limit is higher than the permitted 35 mph.

While Bachtel wants a change in the ordinance to benefit her family she said it would be a benefit to other residents in Marshall County that have golf carts and can’t use them because the speed limit rule.

While they county commissioners were sympathetic to her request, they have some concern with removing the speed limit portion of the ordinance because they don’t want to see golf carts on North or South Michigan Street, Lincoln Highway were there are limited shoulders or even county roadways were there are dips and hills and or turns.

While the county could specifically limit particular county roadways from golf cart usage, it would be more difficult for police to enforce.

The county commissioners took no action and asked the County Attorney, Jim Clevenger to research the issue and bring it up for further discussion at their November 20th meeting.