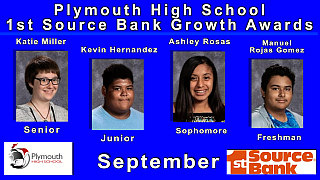 Congratulations to the four September Plymouth High School 1st Source Bank Growth award recipients! Katie Miller, Kevin Hernandez, Ashley Rosas and Manuel Rojas Gomez were all recognized this week during homeroom for the recognized achievements they have each made during the month of September at PHS! Keep up the good work!

Kaitlin “Katie” Miller was selected as the September Growth Award winner in her senior class for showing growth in the area of grade improvement. Katie was nominated by PHS Business Teacher Joel Grindle who said, “Last year, Katie was in my Business Math Class and did not pass the first semester. This year first semester Katie received an A in my class and has 0 missing assignments. She is a completely different student in my class than she was last year. She participates and is a pleasure to have in class.”
Kevin Hernandez was selected as the September Growth Award Winner for the PHS junior class. He was chosen by the Plymouth High School staff because he has shown growth in the areas of both attendance and grade improvement this year. Kevin was nominated by PHS Dean of Students Ken Olson who said, “Last year during the first quarter, Kevin missed 11 days of school, he missed first hour 14 times, and was failing four of his seven classes. The same time in the school year one year later, Kevin has only three absences, and four first hour absences and he is passing six of his seven classes.”

Weidner School of Inquiry sophomore Ashley Rosas was selected as the PHS Growth Award winner for the month of September for showing growth in the area of grade improvement. Ashley was nominated by WSOI Science Teacher John Johnson who said, “Ashley has raised her grade by 30% this month.”
Manuel Rojas Gomez, a freshman was selected as the PHS September Growth Award winner for showing growth in the areas of attendance and assignment completion. Manuel was nominated by both PHS Art Teacher Faith Hansen and (EL) Interventionist Rebecca Ippel. Hansen said, “Manuel has done an excellent job writing his project art critiques with thoughtful and detailed responses!” Ippel said, “Manuel has been working so hard ever since he arrived at PHS to complete all of his assignments in all classes with a high degree of excellence and care.”