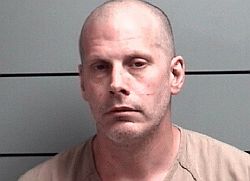 On Sunday, April 16, Officer Matt Emenhiser with the Plymouth Police Department stopped a vehicle for a traffic violation on Jefferson Street at Oak Drive in Plymouth about 12:45 in the morning.

During the traffic stop the driver provided false identification and drove away during the stop proceeding to flee from the officer in his vehicle. Officers from the Plymouth Police Department and Marshall County Sheriff’s Department pursued the vehicle north bound.  They located the abandoned vehicle in a field northwest of Plymouth.  The occupants of the vehicle were not located at that time.

On the morning of Monday, April 17th Detective Leo Mangus with the Plymouth Police Department received information regarding 42 year old Thomas J. Campion of Walkerton.  Officers from the Marshall County Sheriff’s Department assisted Detective Mangus in locating Campion.  Initially, Thomas Campion fled on foot, but was later located in a field off of Plymouth LaPorte Trail near Walkerton and taken into custody.

Thomas Campion was lodged at the Marshall County Jail for Resisting Law Enforcement with a bond of $3,000.00 cash.
Listeners and readers are reminded that charging information supported by an affidavit of probable cause is merely an allegation that a crime has been committed and that there is only probable cause to believe a crime has been committed. They are presumed innocent throughout the proceedings and are entitled to be represented by counsel and entitled to a trial by jury at which the State is obligated to provide proof beyond a reasonable doubt before a judgment of guilt may be made.