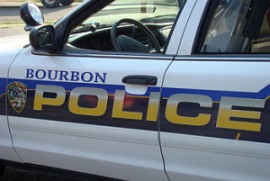 Thursday evening Bourbon Police Officer Rick Kanarr received a report of a passenger car heading north on State Road 331, possibly impaired because they were driving all over the roadway.

About 8:15 Officer Kanarr located a vehicle matching the description on State Road 331 north of State Road 10 and followed it for a short time before conducting a traffic stop.

It was discovered the driver, 39 year old Chasity A Clem of Peru was Driving While Suspended.  The occupant in her vehicle, 57 year old Vernon R Sargent of Nappanee was in possession of synthetic marijuana and methamphetamine.

Both Clem and Sargent were arrested and transported to the Marshall County Jail.  They will each have initial hearings in Marshall Superior Court II on March 7th.  Arrangements were made with family members to pick up a teenage male juvenile who was also in the vehicle.