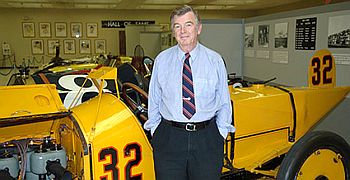 The Marshall County Museum has announced Donald Davidson, the first and only full-time historian of a motor sports facility in the world, will “wow!” us with his knowledge of Indy 500 trivia at our Nostalgic Narratives Dinner on Friday, April 7 at 6 PM at Christo’s Banquet Center.

Over the past 50 years Davidson has been affiliated with the Indianapolis 500 as either statistician, historian or host of a popular radio program, “The Talk of Gasoline Alley.”   His passion for the “500” has led him to co-author a book, Auto-course: Official History of the Indianapolis 500, and write articles for Auto Week, Motor Trend and Road & Track.  He has been featured in articles in Sports Illustrated and has been interviewed on Nightline, CBS Evening News, and CBS This Morning.

Donald Davidson was inducted into the Auto Racing Hall of Fame in 2011 and was honored similarly by the Indiana Broadcast Pioneers Hall of Fame in 2013.  Last May, the Indianapolis Star proclaimed Davidson “one of the 100 most influential people in the history of the Indianapolis 500.”   On May 20, 2016, then Governor Mike Pence named him a Sagamore of the Wabash, the highest honor the State of Indiana can bestow upon a civilian.

Tickets for the April 7 event at Christo’s Banquet Center, are now on sale at the Marshall County Museum, 123 N. Michigan St. in downtown Plymouth.  The price of a ticket, which includes dinner at Christo’s, is $35 for members and $40 for non-members of the historical society.  For more information call the museum at 574-936-2306.   Don’t miss a great opportunity to be dazzled by this passionate veteran storyteller, recounting incredible moments in Indy 500 racing history!