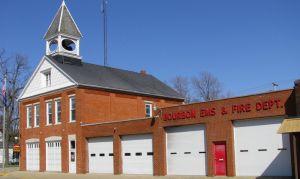 Kim Berger, Bourbon Clerk Treasurer told the town board Tuesday night they will realize significant savings for emergency ambulance coverage over the next few years. Berger, said they had paying over $31,000 per year on a three-year contract with Lutheran EMS. She said the service is now a part of Lutheran Health Network and the fees for 2017 have now been reduced to $15,935.   In 2018, the fees will be lowered to $7,968 and there will be no charge in subsequent years.

In other business residents using golf carts on Bourbon town streets must pay an annual fee of $10 or be subject to fines.  Berger said the sticker showing payment will be attached to a slow moving vehicle sign on the rear of a cart and is larger than in previous years. It was noted that golf carts are not allowed on state highways.

Bourbon Police Chief, Bill Martin said officers logged 3,969 miles during the month of January. Among a long list of other activity, there were six speeding tickets issued ranging from 63/45 zone to 94/55 zone. Martin said the average speed over the posted limit was 23 mph.