Town of Bourbon to Sell Property at 308 East Center Street 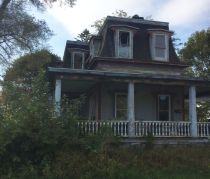 The Bourbon Town Council has tentatively set an auction time in April of this year to sell the recently cleared property at 308 E Center Street. After several months of legal battles, the town was able to proceed with the demolition of a dilapidated house and clearing of the property. According to Keyser, an entire Center Street strip has been rezoned as residential by the county. The Bourbon Council voted unanimously to approve the residential zoning.

Keyser said the average of two appraisals done on the large lot is $19,250. The town spent some $18,000 to obtain and clear the property.  A minimum purchase price would be the appraisals’ averages.

It was not decided what specific day for the auction or what type of auction they plan to hold. It is anticipated that the final details will be released at the March meeting. McFarland proposed that the sale include stipulations that a purchaser must begin construction of a home within one year and have it finished within two years. Failure to compete the deadlines would mean the town could take ownership back from the purchaser.