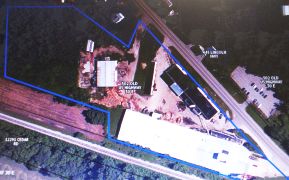 Tuesday evening the Bourbon Town Council agreed unanimously to schedule yet another meeting with the General Manager, John Edminister, of Shell. In previous meetings and through numerous correspondences, the company was informed of the need to clear mounds of debris from their property. Wagner confirmed that the latest weigh tickets provided by Shell show 94 tons of materials was hauled offsite on January 30 and an additional 235 tons was removed on February 1-2. Wagner said, “We don’t know how much they are producing today.”

The main area of concern is mounds of debris that was placed on top of water lines. The water lines not only provide water to Shell, but also to neighboring residential houses. Bill Keyser, Bourbon Zoning/Building Commissioner said, “If the water line breaks, there is no way we could get to it.” Board President Les McFarland said, “They agreed to clear the water lines, but nothing has been done.”