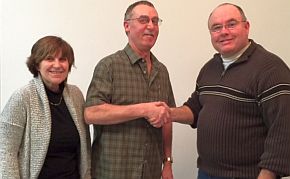 During their February meeting, the Bourbon Town Council honored retiring Doug Eyrich for his 33 years as a volunteer on the Bourbon Fire Department.

In his 33 years with the department, he served seven years as the Fire Chief.  Eyrich said, “I enjoyed it..especially with the kids.” As a part of his service, Eyrich spoke to classes at the Triton Schools about fire safety.

The council members shared their appreciation for both Eyrich and his wife Barb. Council President Les McFarland spoke of Barb’s “support behind the scenes” and her help with years of fundraising.

Council members Larry Wattenbarger and P..J. Hanley thanked Eyrich on behalf of the community. The Council plans to give the couple a gift certificate as a token of their appreciation.