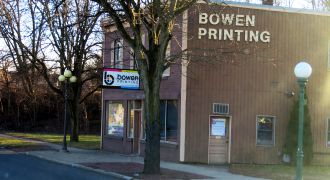 A 32 year old Plymouth man was arrested by Plymouth Police Monday night after a concerned citizen reported to police a possible burglary in progress at Bowen Printing at 200 South Michigan Street.

About 11:30 city police officers were dispatched to Bowen Printing.  Officer Paul Stamper was the first on the scene and located Austin G. Ricks of Plymouth at the back of the building ready to get on a bicycle.

Mr. Ricks was taken into custody while Plymouth officers and Indiana State Police secured the perimeter.  A search of the business was conducted and no other suspects were located.

Police were able to determine that Ricks has forced entry into the building through the front door of the business.

Austin Ricks was booked into the Marshall County Jail and held on a $1,500 cash bond for Burglary.