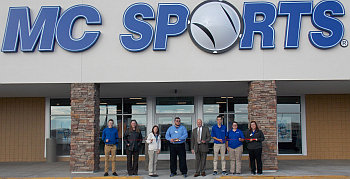 As part of an ongoing process to restructure the company, MC Sports has initiated voluntary reorganization proceedings under Chapter 11 of the U.S. Code in Grand Rapids, MI on February 14, 2017, Court Case No.17-00612.

“After a valiant and concerted effort by MC Sports’ associates, vendors, landlords, and outside professionals to restructure the Company’s balance sheet and operating performance, the Company was unable to reach an agreement on a viable out of court proposal. The only alternative to address our immediate liquidity issues is to commence liquidation sales at all stores, while concurrently expediting our pursuit of alternative financing and going-concern sale options under the protections of Chapter 11,” stated Bruce Ullery, MC Sports President and CEO. “To lead our exploration of alternative options, the company recently retained the independent advisory firm, Stout Risius Ross Advisors, LLC.”

Like many retailers in the sporting goods industry, the company has faced increased competition, the blurring of distribution channels by key athletic and outdoor brands, increasing direct to consumer sales by key vendors, and the market disruption and growth of ecommerce. In response to these headwinds, the company has been systematically moving to larger format stores that combine hunting, fishing and outdoor categories with traditional sports gear, footwear, and apparel. In addition, it has worked diligently to shed poor performing locations as lease opportunities became available.

Despite these actions, the company believes that the decision to file and the commencement of liquidation sales are necessary to address the Company’s immediate liquidity issue. The filing will allow the Company to address a number of legacy costs, including long term leases that are no longer in line with current market conditions, and trade debt that has hampered the company’s ability to develop a clear path forward.

Founded in 1946 in Grand Rapids, MI, MC Sports has been a leading sporting goods retailer selling quality, authentic sports gear, footwear, and apparel throughout the Midwest. The MC, which stands for My Community, reflects the company’s commitment to both community and individual aspirations in sport, competition and personal improvement. As of February 14, 2017, MC Sports operates 68 locations in 7 states throughout the Midwest, including Illinois, Indiana, Iowa, Michigan, Missouri, Ohio, and Wisconsin. It should be noted that the 68 locations include 1 onsite Ski Shop at Cannonsburg Ski Area in Belmont, Michigan. The company is headquartered in Grand Rapids, MI.