Plymouth Board updated on street and sidewalk projects 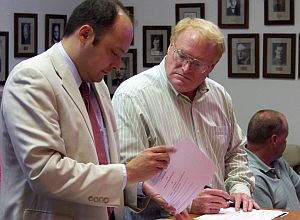 Speaking to the Plymouth Board of Public Works and Safety Gaul told members that the street projects have been outlined that will make use of the funds provided by the Community Crossings grant program.

The City will undertake microsurfacing of several city streets; Oak Drive from State Road 17 to U.S. 30, Jefferson Street from Oak Hill to 5th Street, Oak hill from the corporate limits to Michigan Street.

Gaul said that the city had been instructed by INDOT to make changes in contracts for the projects using unit pricing instead of a lump sum. The change would necessitate closer scrutiny of contractors undertaking the project.

Sidewalk projects will take place on Jefferson Street from the Yellow River to Kingston, on Plum Street from Washington to Jackson, on Pidco Drive from Jim Neu to Oak and Markley from Shamrock to Western.

Work on the new traffic signal at Soice and Oakhill Avenue will start receiving bids on April 10. There had been a hope that the project would come in at around $250,000 but the final cost estimate was $265,000 but Gaul said it was hoped that some additional savings could be found.

Gaul said that traffic studies done at the intersection by Webster School had shown that a very significant amount of traffic made right turns at Soice so there would be two lanes of traffic there.

The city has set a deadline for work to be completed at by July 31 because of school being in session starting in early August.

In Other Action; Oliver Ford in Plymouth was awarded two vehicle contracts by the city.

The first for a heavy duty 4×2 4500 series pickup. Three bids came in for the Street Department truck but the other two were for a truck whose transmission would not work for the city’s application of slow spreading of road material.

The second award was for two Police Department vehicles. Three bids were solicited and there were no other bidders. Oliver will supply the vehicles  for the department.