Bope Sentenced for Crash with Amish Buggy in 2014

Laurie Bope, 46, was sentenced in court Friday with the State of Indiana, represented by Matt Sarber of the Marshall County Prosecutor’s office, and June E. Bules as her counsel. Bope admitted to three criminal offenses related to driving a pick-up truck on U.S. 6, near Bremen, with illicit drugs in her system and causing injury to passengers riding in a horse-drawn buggy. The three charges were each for causing serious bodily injury while operating a vehicle with a controlled substance in her body, all felonies.

The serious bodily injury occurred when Bope’s vehicle slammed into the back of a horse-drawn buggy being driven the same direction on the highway. Two minor children and their father were riding in the buggy at the moment of impact. The passengers were violently ejected from the buggy, and later airlifted for emergency medical care. The Indiana State Police responded to the crash scene and investigated the incident. While at the scene the horse involved in the accident was euthanized due to extensive injuries.

The collision occurred the afternoon of November 14, 2014, over two years ago. However, the case languished for some time partly due to Bope losing contact with the court and her attorney. Earlier trial settings were vacated because the whereabouts of Bope were unknown, and eventually a warrant was issue for her arrest. June E. Bules was later appointed to represent Bope in the pending case. 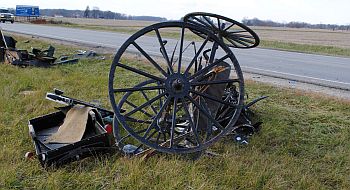 The case alleged nine (9) separate violations of Indiana law – all related to illegal drugs and driving. In exchange for admitting to the three felony OWI charges, the remaining lesser charges were dismissed. Bope was sentenced to the maximum penalty of two and a half years at the Indiana Department of Corrections. One and a half years of that time will be served on reporting probation, leaving 365 days of incarceration time to be imposed by the Hon. Dean A. Colvin.

Deputy Prosecutor, Matt Sarber, spoke during the sentencing hearing and presented a recantation of the accident. In doing so he stated “A miracle occurred in this case. When you look at the photographs from the scene – there is no other way to explain how the passengers in that buggy were not killed. I can happily tell the Court that the children, and their father, do not suffer from any permanent impairment as a result of this accident.” 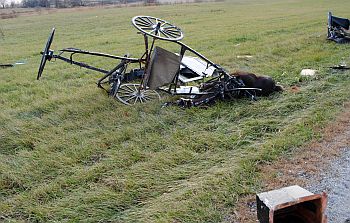 Bope expressed her remorse for the events, and that she does not plan on attempting to have her driving privileges reinstated any time soon. Sarber asked that “the Court impose the sentence prescribed in the plea. Ms. Bope was incredibly fortunate no one was killed. Still the crimes she committed are significant – and she must suffer the consequences.” Bules concurred in the fortunate nature of the case, and requested Judge Colvin impose the sentence under the plea.

After being sentenced, Bope was remanded to the custody of the Marshall County Sheriff.