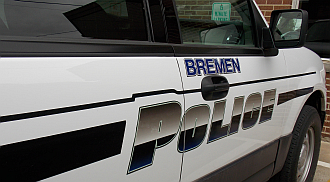 Saturday night, just before midnight Bremen Police arrested 36 year old Joshuah Cherrone of Bremen after he was stopped on 2B Road east of State Road 331.  Cherrone was arrested on a Warrant through Elkhart County for Failure to Appear.

Early Sunday morning Officer Jesse Pippenger with the Bremen Police Department served a warrant on 22 year old Skyler Gainers of Bremen at 113 West Harding Street.  The arrest was for a Failure to Appear for Driving While Suspended and Operator Never Licensed.

These individuals were booked into the Marshall County Jail.

The charges and information supplied are merely an allegation that a crime has been committed; all subjects are presumed innocent until proven guilty.