Yoder Arrested for Battery to Law Enforcement, PI and Resisting 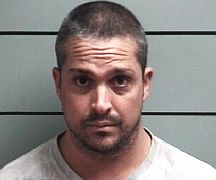 On Thursday February 9, a concerned citizen called the Marshall County Dispatch Center about 5:30 in afternoon for a possibly intoxicated male at the “Creekside School” at 6378 Beech Road.  The caller told police the subject left in a vehicle, and later advised that he returned and had gotten to the school.

Marshall County Police, Bremen Police, and Indiana State Police responded to the school and saw the male subject flee into the basement.

The subject resisted law enforcement and was taken into custody. He was identified as 37 year old Jason L. Yoder of Wakarusa.

Yoder was lodged in the Marshall County Jail for Resisting Law Enforcement, Battery Against Law Enforcement, and Public Intoxication. His cash bond was set at $1,500 and his initial court day is scheduled for February 28th in Superior Court II.