Riverside Students Present for School Board 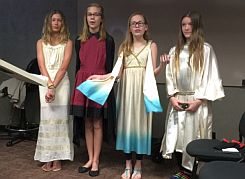 Riverside Intermediate students, Mila Cramer, Maddie Record, Ella Schwenk, and Mia Treber, shared some of the highlights of a project they have been working on at the Plymouth School Board on February 7.

The presentation entitled “Ancient Greeks Culminating Event” included information on the Trojan War, the first Olympic Games, the first Greek Play, and when Rome invaded Greece. The students said their culminating event was based off the fact that the Greeks invented theatre. 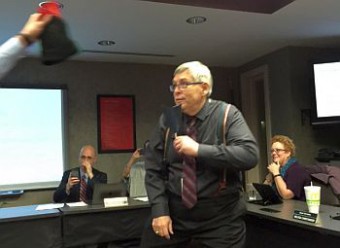 They dressed in costumes that were similar to those that would have been used in Greek theatre. 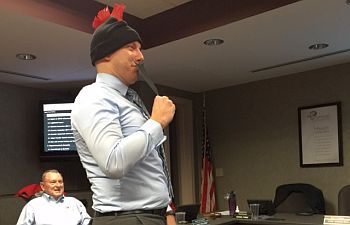 They asked for volunteers from the audience to reenact what might have taken place during one of the events. Menominee Elementary Principal, Steven Boyer, and Superintendent, Daniel Tyree, used props that the students provided to demonstrate how fake swords, shields and helmets were used in plays.