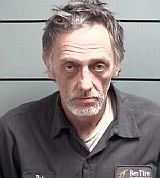 On Tuesday February 8, at approximately 11:50 in the evening an officer with the Marshall County Police Department initiated a traffic stop on US 31 near 11th Road for an equipment violation.

During the course of that traffic stop it was determined that the driver, 52 year old Robert Freet Jr. of Twelve Mile was impaired. He was also found to be in possession of marijuana and methamphetamine.