Saturday evening, just after 7 Officer Jonathan Bryant with the Marshall County Police Department stopped a vehicle near the intersection of Tamarack and 3rd Road. 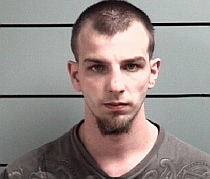 Both were lodged at the Marshall County Jail, Cliff on a $500 cash bond and Shane was held without bond on two failure to appear warrants, one for a probation violation and the other for a felony.