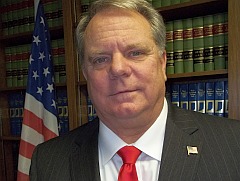 Hampton gave no specific reasons to be replaced other than relying on state statute that it would be appropriate for a different prosecutor to be handling the case.

At that time, Chipman and Chief Deputy Prosecutor Tami Napier immediately engaged the investigatory assets of the Indiana State Police and requested a grand jury be convened in December, 2015 and February, 2016.

As a result, three individuals were indicted, including current Kosciusko Sheriff Rovenstine. Rovenstine’s charges include 10 felony counts consisting of three counts of bribery, a count of intimidation, a count of assisting a criminal, and five counts of official misconduct.

In the final stages of trial preparation, Chipman revealed to defense counsel and Special Judge Evan Roberts that personal health concern had arisen, that, after consultation with his medical providers, led Chipman to decide to transition away from any further direct involvement with the case.

At this point, Chipman will continue to concentrate on managing the day to day responsibilities of the Prosecutor’s Office.

Napier and Deputy Prosecutor Matthew Sarber will try the case which is scheduled to begin February 7 and continue to February 15 in the Kosciusko County Justice Building.

Both the prosecution and the defense are expected to call some 50 witnesses to testify.

Chipman said, “It is a great disappointment that I must personally withdraw from any further direct involvement in the case. It is important at this time that my energy be focused elsewhere.”

He added, “I have all the confidence in the world in Ms. Napier and Mr. Sarber to carry the case forward in a professional manner in pursuit of justice.”  “It is imperative to all parties involved, including Mr. Rovenstine, the law enforcement agencies involved, and frankly, the entire Kosciusko County community that this case be tried before a jury and resolved. I certainly did not want my personal situation to delay that resolution.”

Sarber said, “My hope is to harness the devotion Mr. Chipman demonstrated throughout this case. I look forward to presenting the evidence and arguing to the jury in the pursuit of justice.”