Explosion and Fire at CJ Poly in Plymouth, No Injuries 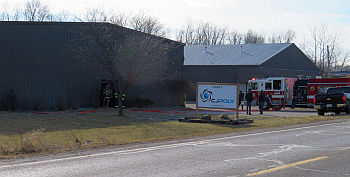 Firefighters from the Plymouth Fire Department responded to CJ Poly at 911 Markely Drive about 3 o’clock Thursday afternoon after a poly-extruder exploded and caught fire.

Employees were evacuated from the building and smoke was rolling as Plymouth Fire Chief Rod Miller arrived on the scene.  Flames were showing inside the building but were knocked down by firefighters in a matter of minutes.

CJ Poly is a full service plastic recycling company of post industrial plastic.  They have been operating in Plymouth since 2006. 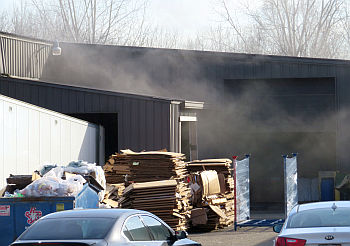 Chief Miller immediately sought assistance from the Bremen Fire Department with their aerial truck, a town truck and man power, a procedure they now do with industrial fires as a precaution.

Chief Miller said, “We were really lucky.  Something, possibly static caught a couple of pallets of poly bead on fire.”  He said it was a small fire and the interior fire suppression system did not activate.

The explosion was so loud and hard the employees at the City Street Department Garage heard and felt it with Street Superintendent Jim Marquardt saying it rattled their building.

No injuries were reported at the plant or by the fire department.

Crews were on the scene for about an hour with much of that time being used to clear the smoke from the building.