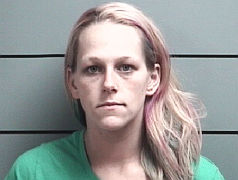 Marshall County Police Officer Jordan Rans was patrolling in LaPaz on Monday, January 30, at about 3:30 in the afternoon when he was asked to investigate a suspicious vehicle in the 100 block of South Michigan Street.

During his investigation a firearm with the serial number removed was located in the vehicle. The firearm was later determined to be stolen from a burglary that had occurred in Argos, earlier in January of this year.

28 year old Jamie Kay Beam of Argos was arrested and lodged in the Marshall County Jail for Possession of Stolen Property, Possession of a Firearm with Obliterated Serial Number, and Resisting Law Enforcement.

Further investigation into this matter led to the burglary case from Argos being solved.   Additional charges for Jamie Kay Beam are expected.