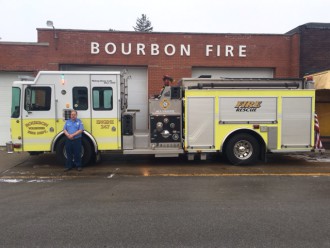 BOURBON – A fireman in Bourbon since September of 2007, Nic Lindsey was humbled and honored as he was announced the Bourbon Volunteer Fireman of the Year.

“The nomination can come from a number of things,” Chapman said, “including outstanding community service or going over and above, something that’s recognized. We, Bourbon Fire, have a yearly Firefighter of the Year award from our department and we vote on it at the end of year. “

When it came to Lindsey, who is assistant fire chief for Bourbon, it seemed to be an obvious choice. A truck mechanic by trade, Lindsey spearheaded an effort to work on a new engine for the department.

“This year, we were fortunate to get a new – not brand new, but new to us – truck and he put in a tremendous amount of time working on that engine,” Chapman said. The truck is a 2005 HME Smeal custom six-man cab engine, 1750 GPM pump with 1,000 gallon water tank, with a deck gun and Jaws of Life. “For a department our size, it’s really hard with a limited budget and small community. We just don’t have the tax base that other communities do. It takes a lot of involvement with our membership. But on an undertaking like this where we get a completely new engine – and actually we got rid of two trucks and made one – there was a lot of time that went in to that. Not only does Nic do that by trade, but he spearheaded that for us. It was a tremendous effort and took countless hours of time.”

Chapman explained that for a small town like Bourbon, to get a really good engine is a big deal. “It’s a real morale boost,” he said. “It was a lot of work; it’s prideful and for our department, it means a lot.”

As a reference, Chapman likened a new engine Plymouth just purchased for around $580,000. “That’s just never going to be an option for Bourbon. Ours that cost $180,000 is still a really big deal. Firefighting can be a thankless job, and Nic has a full time job. On average, we’re already out 130 times a year between training and being needed for runs – that’s just the base requirement. And for Nic to spend additional massive amounts of time is just above and beyond.”

Lindsey said he was not expecting to receive the designation, but was honored. “No, I didn’t expect that at all,” he said, adding that even though generally helping people is a highlight of the fire job, one memorable day with the department included a burning home in Tippecanoe a couple of years ago. “We got a guy out and he lived.”

Not only was Lindsey bestowed the honor of his hometown department annual award, he was chosen as a co-firefighter of the year for Marshall County.

“Each department within the county can submit their nominees for the Marshall County Fireman of the Year, which is then chosen by the Marshall County Firefighters Association,” Chapman said. Since Lindsey was named “co,” this means at least one other fireman will be named in the near future. As soon as the announcement is made, it will be announced publicly as well.