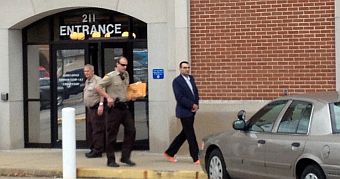 Dodson case that stemmed from a December 29, 2014 shootout with two Plymouth police officers.

Dodson was found guilty in a 3 ½ days trial in December of 2016 of attempted murder, domestic battery

and intimidation. In addition to the 35 year sentence for attempted murder to be served in the Indiana

and one year for each of two domestic battery charges. All three sentences are to be run concurrently.

against his then wife, Heather Dodson. Video showed Dodson raising a gun at the officers and pulling

the trigger. Officers then returned fire seriously injuring Dodson in the hand, shoulder, neck and back.

During the trial, MC prosecutors showed the actual windshield of the vehicle Dodson was driving with

During the trial, Dodson and his attorney, Marc Morrison, denied that he pointed or fired a weapon.

Following the incident, Dodson underwent some six surgeries for those injuries and had been allowed to

be on house arrest to receive ongoing medical treatment until November 16, 2016. At that time, Dodson

ankle bracelet he had to wear as a part of his house arrest probation be removed. Although Bowen

advised Dodson that removing the bracelet would mean in would have to go to jail, Dodson said he

wanted it removed. He was held in the MC jail until his December, 2016 trial.

During the sentencing, Judge Bowen said there is a range of 20-42 years for attempted murder and an

advisory of 30 years. Bowen said the 35 year sentencing decision came down to the fact that Dodson

never took any responsibility and there was a firearm used against law enforcement officers.

Deputy prosecutor, Tami Napier, had taken the lead during the entire two years since the 2014

incident. After the sentencing on Wednesday, she said she was sworn in for her position only three days

after the shooting. In her final words to the court, Napier said this was the kind of case that police and

Dodson’s mother, Connie Dodson, testified during the sentencing saying her son’s condition has

worsened since he was found guilty on December 2. She testified that due to insurance carriers switches

prior to his incarceration, Lane had not received all of the medical care needed including doctor’s

appointments and therapies. Dodson has a permanent tracheotomy and a steel plate in his hand.The

tracheotomy tube aides him in breathing and talking.

Lane Dodson , 35, testified saying he has trouble swallowing and has not been able to sleep at a 45

degree angle in jail. Morrison asked that his client be able to be on house arrest for 20 years to get

After the sentencing, Dodson said he plans to appeal. Judge Bowen advised him that he must file the

appeal within 30 days and that he could request a court appointed attorney. Dodson said he is working

on getting a private attorney.

After the sentencing, Prosecutor Nelson Chipman and Napier both indicated they respect Bowen’s

judgment. Chapman said, “In numerous times through cases, I have respected the depth by which

Chipman said, “ We know he (Dodson) Is injured. And those were a direct result of his actions. It is quite

clear that he was blaming it on the officers.”

Napier said, “Dodson used a firearm with no provocation. To this day he refuses to accept

responsibility.” She said the heart of this case is law enforcement and their families.” “This was a routine

traffic stop that had its base in domestic violence.”