Ahead of Culver Academies’ trip to Washington, D.C., to march in the Presidential Inaugural Parade, U.S. Representative Jackie Walorski (R-Ind.) on Monday night joined students for a pizza party send-off.

“I just wanted to tell them how proud I am of them for the hard work that goes into this and for the honor of representing Hoosiers in the Inaugural Parade,” Congresswoman Walorski said. “There’s nothing like what Culver Military Academy brings with this equestrian team. This is part of what makes Hoosiers incredibly proud of who we are.” 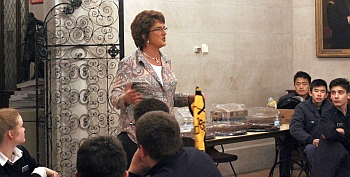 Those participating in the parade will include 56 cadets from Culver Military Academy’s Black Horse Troop and 24 Equestriennes of Culver Girls Academy.

This will be the 17th time Culver Academies have taken part in a Presidential Inaugural Parade since 1913, when the Black Horse Troop escorted Vice President Thomas Marshall, who previously served as governor of Indiana.