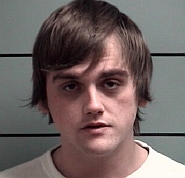 Plymouth Police arrested 23 year old Sean A. Critchlow on Friday, January 13th after police posted surveillance photos from a robbery and attempted robbery at the Plymouth Kroger Store on January 12th open social media and with the local media.

On January 12th about 10:30 in the evening the Plymouth Police Department received a report of a white male that had attempted to commit a robbery at the Kroger Store in Plymouth.  That same suspect left the store and became involved in a physical altercation with someone in the parking lot outside Kroger.

Another customer saw the incident and fired a handgun into the air to stop the attack.  The suspect left the area headed north with stolen items.

Several tips lead police to Sean Critchlow.  He was located Friday afternoon and booked into the Marshall County Jail for Robbery and Attempted Robbery and held on a $10,000 cash bond.