Earlier this month members of the Plymouth Board of Zoning Appeals heard the variance request of Richard and Melinda Wilson of 15428 Tuxedo Drive.  While this property is outside of the Plymouth city limits, the BZA does rule on issues in the 2-mile zone.

The Wilson’s needed a variance to development standard to place a storage shed 3 feet from the east property line instead of the zoning ordinance requirement of 10 feet.

City Planning Consultant Ralph Booker told members; Mr. Wilson was issued a building permit and was told the setback standard was 10 feet.  Once the shed was located, City Building Inspector Keith Hammonds was called to look at the site and determined the shed was not placed where the plans had shown it would be.  Instead of the 10 foot setback it was only a 3 foot setback.

After some discussion with residents of the subdivision the Plymouth Board of Zoning Appeals approved a variance allowing the Wilsons to keep the shed in the current location, not forcing them to relocate it. 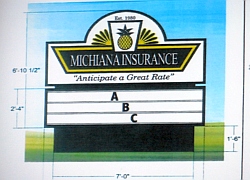 The Plymouth BZA also approved a variance for a monument sign on West Jefferson Street.

Lauren Overmyer with Vanadco Signs told BZA members Michiana Insurance purchased the property at the corner of Jefferson and 5th Street, formerly Powell Real Estate.  They would like to place a 55 square foot sign in front of the business at 818 West Jefferson Street while the city’s standard is 32 square feet.  Overmyer explained that their logo was the cause of the bigger sign and the need to have a copy board under the logo.

One neighbor, Becky Atkins spoke against the sign while a second neighbor wrote a letter opposing the dimensions of the sign.

Owner, Jerome Keirn told the board he invested in the property and felt the sign needed a more commercial look since the building was a former residence.