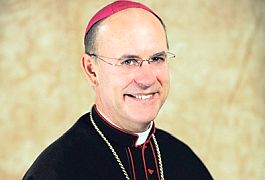 Plymouth Mayor Mark Senter is pleased to announce this year’s speaker for the Annual Prayer Breakfast to be held on Thursday, May 4th at 6:30 am at Christo’s Banquet Center.  The proceeds will benefit the local Boy Scouts of America Troops and Packs.  Tickets for the event will be $10 each or you can sponsor a table of 10 for $100.  Call Laura at 574-936-6717 to reserve your tickets.

The keynote speaker will be Bishop Kevin Rhoades.  Bishop Rhoades is the son of the late Charles and Mary Rhoades and the brother of Charles Rhoades and Robin McCracken. He was born November 26, 1957, in Mahanoy City, Pennsylvania, located in Schuylkill County in the Diocese of Allentown, and baptized at Saint Canicus Church there. He grew up in Lebanon, where he was a member of Assumption of the Blessed Virgin Mary Parish. He attended the former Saint Mary’s School in Lebanon and graduated from Lebanon Catholic High School in 1975. He enrolled at Mount Saint Mary’s College (now University) in Emmitsburg, Maryland, in the fall of 1975, and studied there for two years. In 1977, he entered Saint Charles Borromeo Seminary in Overbrook, Pennsylvania, and earned a bachelor’s degree in philosophy there in 1979. He did his theological studies at the North American College and the Pontifical Gregorian University, both in Rome, from 1979-1983. He also studied Spanish at the University of Salamanca in Spain during the summer of 1982.Cardinal Terence Cooke ordained Bishop Rhoades a deacon at Saint Peter’s Basilica in Vatican City in 1982. He was ordained a priest of the Harrisburg Diocese on July 9, 1983, by then-Auxiliary Bishop William Keeler.