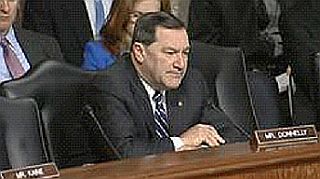 Washington, D.C. – U.S. Senator Joe Donnelly raised his concerns on Russian interference in U.S. elections and our country’s cybersecurity strategy in a Senate Armed Services Committee hearing Thursday. During the hearing, Donnelly reiterated his confidence in the American intelligence community.

Donnelly said in his opening remarks, “I want to be clear that today’s hearing is not to debate the validity of the election but to discuss foreign attempts to use cyber-attacks to attack our country, including the recent Russian actions intended to influence our elections. I appreciate the bipartisan efforts to get our people the answers they deserve, and I’m grateful for the amazing efforts that our intelligence agencies put forth every single day…I can tell you on behalf of all Hoosiers that when it comes down to a choice between your people, our intelligence agencies, and Julian Assange, we are on your team every time.”

Donnelly raised concerns about whether the U.S. clearly communicates that the consequences of a cyber-attack on our country will outweigh any gains an adversary hopes to achieve. He also questioned the panel on U.S. efforts to effectively deter state-sponsored cyber-attacks and examined the scope of Russian-backed malicious cyber activity, highlighting the severity and apolitical nature of the threat to the U.S. and our allies.