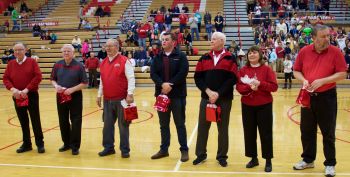 PA Announcer John Scott said, “These individuals selected have provided above and beyond their time, attendance or financial support for Plymouth High School Athletics.”  He said they will be honored in the athletic hallway across from the auxiliary gymnasium.
2016 Inaugural nominees were: Deb Davis, Diane and Herb Eveland, Frank “Pops” Holloway, Jim Maurer, Mike Mercer and John Oliver.

Deb Davis  kept the scorebook for girls basketball games for a total of 17 years. This included three years at Lincoln Junior High and 14 years for Plymouth High School.  Besides being a huge fan of Big Red Basketball, she was also a good friend to the players and coaches.

Diane Eveland was an elementary school teacher in Plymouth from 1965 – 2003. She has worked for the PHS Athletic Department for over 50 years.  She has sold game tickets at football, basketball, baseball, volleyball, wrestling, track, and softball games over the last 50+ years.  Besides selling tickets at PHS sporting events, Diane also has kept a scorebook in volleyball and basketball. Diane is proud of her perfect attendance for working every home football and boys basketball game over the last 50+ years!!

Herb Eveland  was an art teacher at Lincoln Junior High and Plymouth High School from 1967 – 1998. During that time, he has had several jobs for the PHS Athletic Department. This includes parking cars at Lincoln Junior High when varsity football games were played there before the Rockpile was built.  Herb also has run the scoreboard for boys basketball, girls basketball, football, track, wrestling, and volleyball games. He still continues to serve the PHS Athletic Office in working several sporting events each year.

Frank Holloway – “Pops” was a fixture at Plymouth High School athletic events for 65+ years. His mind was sharp even in his later years. He was still able to recall certain athletes or athletic events as he approached his 100th birthday. He was a charter member of the Plymouth Athletic Booster Club.   He was always adorned in his Big Red clothes when attending an athletic event. He loved to wear his Big Red sweatpants with his name on them. His favorite pregame meal at football, basketball, and baseball games was a hot dog and a red Powerade. A plaque adorns the seat he always sat in while attending a Plymouth Pilgrim baseball game at Bill Nixon Field in Centennial Park.  Pops died just four months short of his 100th birthday.

Mike Mercer was a Social Studies teacher at Lincoln Junior High from 1962 – 2007. During that time, he served as a junior high basketball coach for 30 years.  He also served the athletic department at PHS and Lincoln Junior High by driving a bus and the student-athletes to various venues around Indiana, running the clock at varsity football games since 1964, track coach, baseball coach, and PA announcer at basketball games.

John Oliver – John came to America from England in 1962 at the age of 18. He came to Plymouth in 1966 as a laborer and worked at Ireco Aluminum.  Moving up the corporate ladder at Ireco, he became president in 1977. By 1986, he became the owner and renamed it US Granules.

In 1996, he donated money to have the baseball stadium built to honor former head baseball coach Bill Nixon. For his financial contribution to high school baseball in Indiana, he was inducted into the Indiana High School Baseball Hall of Fame in 2009.