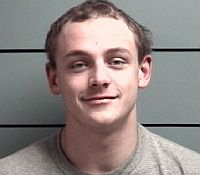 Sterling is wanted in connection to a criminal case from December 11th 2016 at the Economy Inn involving Conspiracy to Commit Robbery, Confinement, Battery and Theft.

Detective Leo Mangus with the Plymouth Police Department said they had received a report of a robbery earlier in the day on December 11th where the victim had been beaten, cut and tied up by two males and a female.  The suspects also took all of his belongings.

The unnamed victim told police that he had been left in the room at the Economy Inn and when the perpetrators left he was able to escape and left the motel area.

Plymouth Police Detectives began an investigation that lead them to 20 year old Gregory R. Peppers of Bremen and another male subject who is now deceased.

On January 4th arrest warrants were issued for Gregory Peppers and Abbey Sterling.  Peppers was arrested by Detective Mangus on the morning of January 5th while police are seeking the public’s assistance in locating Sterling who has an unknown address.

If you have information on her whereabouts you are asked to contact Detective Mangus at the Plymouth Police Department.  574-936-2126 ext 1208.