Cupka Re-appointed to Plymouth School Board 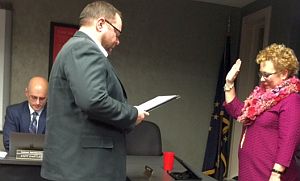 The Plymouth School Board held their first meeting of the new year on January 3.

Todd Samuelson was re-elected as Board President. Also retaining their positions were Larry Holloway, vice-president, and Melissa Christiansen, secretary.

Taking the Oath of Office was new member Robin Cupka.  Cupka was appointed to fulfill the term of Jenny Sickmiller for December, 2016.  She will now be a member of the Board for a four-year term.

Samuelson will also continue as legislative liaison. Laura Kruyer, co-president of the PEA (Plymouth Education Association) spoke briefly to introduce an idea of forming a community coalition to help reach state legislators concerning educational needs. She suggested working with all of the school corporations and communities in Marshall County.

After the meeting Kruyer said, “The appointment of Todd Samuelson as legislative liaison was an opportunity to suggest looking into creating a coalition. PEA wanted the school board to know the association is willing and ready to join them and other pubic groups in an effort to promote public education.”

She added, “A strong public school system is in the best interest of our communities as it helps to provide an educated work force, helps to increase property values, and attracts businesses to the area.”   Kruyer continued, “With the many challenges facing public education today, there is a growing need to establish a board coalition in the support of public education.”   She went on to say, “The coalition needs to include parents, teachers, school corporations, business leaders, and community leaders in order to be effective.”

Kruyer indicated that a coalition would reach out to legislators saying, “It could help lawmakers develop a greater understanding of how educational laws impact out local communities.”

Superintendent Daniel Tyree introduced the proposed 2017-2018 school calendar to the board and received unanimous approval. Tyree said they had originally had no classes on the Thursday before the annual Blueberry Festival; however, in speaking with PEA representative Megan Atkinson they learned that teachers would prefer to have an extra day off before the Christmas vacation.  Tyree said they have not included snow makeup days since they have instituted virtual e-learning days. The internet based days can only be used four days in a row before they would have to use a make-up day. In the event that make-up days would be needed, Tyree said they would use Martin Luther King Day and President’s Day.

The next school board meeting is scheduled for February 7 at 7:00 P.M.