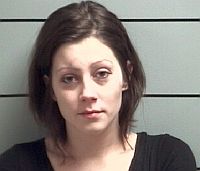 Early Monday morning, January 2nd Officers from the Marshall County Police Department and emergency responders from Polk Township Fire and Walkerton Police were dispatched to a crash in the area of US 6 and West County Line Road.

About 2:30 emergency crews found a single vehicle rollover accident involving a Plymouth woman.  During the investigation, it was found that the driver, 25 year old Alaina D Masterson was not injured.