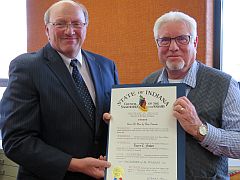 Over the last 63 years Marshall County has only been served by two surveyors, Frank Kleinke and Larry Fisher.  Kleinke served the citizens for 31 years and Fisher, who retired last Friday, served Marshall County for 32 years.

Fisher was honored with a retirement party with family, co-workers and friends.  During the event County Clerk Deb VanDeMark gave those in attendance some background on Larry.

Serving as Marshall County Surveyor from 1985 to 2016, Fisher also served on the Technology Committee, Personnel Committee and Safety Committee for the county.  He was named the outstanding surveyor of the year in 1991.

During the party County Commissioner Kevin Overmyer presented Fisher with the Sagamore of the Wabash, the highest distinction in Indiana and awarded by the Governor. 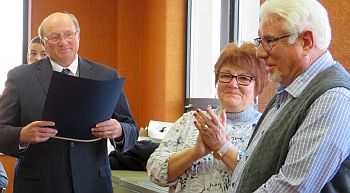 Fisher was visibly shocked with the award and said to those gathered,
“It is no higher honor than to receive the Sagamore, but there is I guess an exception, to serve the people of Marshall County.”  He continued, “The people have been really good to me, good to us and we really appreciate that.  I leave the office hoping that I left it in a better place than I found it.”