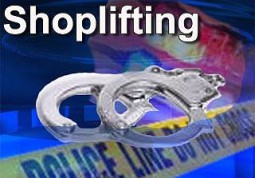 On Friday, December 30th Officer Jeremy Enyart responded to a male subject running from the local Walmart Asset Protection employee about 5:30.  The suspect, 54 year old Andre S. Williams of Los Angles, CA was attempting to leave the area in a semi.

City Officers Shanna Gilmer and Krynock made a traffic stop on the semi before it was able to leave the Walmart parking lot.

Asset Protection said Williams and a female had been in and out of the store several times during the day and they had found open packages at locations where the pair had been inside the store.

Andre Williams was transported to the Marshall County Jail where he was held on a $2,250 cash bond and given a January 31st date in Superior Court II for his initial hearing.

About 7 o’clock New Year’s Eve Officer Chad Beatty was dispatched to Walmart when a couple attempted to flee Asset Protection with stolen items.

Officers were able to stop the vehicle and 19 year old Allison Manchester and 32 year old Joshua Ray, both of Peru were arrested for theft while Ray was also charged with driving While Suspended with a prior.   Both were booked into the County Jail.

About 9:45 Monday, January 2nd Officer Steve Delee arrested 26 year old Steve Mink of South Bend for theft from the Plymouth Walmart.  He too was lodged in the County Jail.