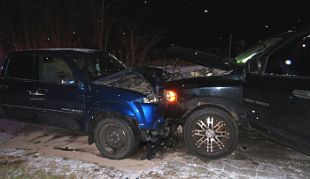 Last Thursday night’s wintery weather played a factor in a head-on crash on 6A Road east of Oak Road.

Marshall County Police were dispatched to 6A Road in front of GB Customs for a two vehicle crash about 6:50.  Officer Jordan Rans was the investigating officer.

The crash report shows that Ismael Hutzar Magallanes of Plymouth was traveling east on 6A Road in a 2004 Dodge Ram 1500 when his truck started slipping on the roadway due to the icy road condition.  Unable to gain control, the truck drifted over the center line and struck a 2006 Toyota Tundra driven by David King of Mishawaka that was west bound on 6A Road.

Airbags in both vehicles deployed from the force of the impact.  Magallanes refused medical treatment while King was transported to the Plymouth Hospital for a complaint of pain.