Commissioners Wrap up 2016 in Final Meeting of the Year 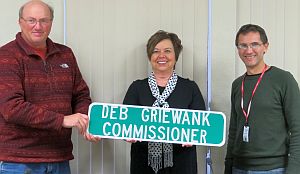 Overmyer had a special recognition for County Commissioner Deb Griewank. He thanked her for the 4 years service and for all her help in handling county government items and then presented her with the sign used to mark her parking space since January 2013.

Commissioner Kurt Garner thanked Griewank for “showing him the ropes” for two years.

Commissioner Griewank stated that she has learned a lot saying, “There’s a lot more that goes on in county government than one realizes.  Your eyes are vividly open quickly.  I walked around with the deer in the headlights look for about my first year and then after that dug me feet in a little bit more and it was a bit easier.”  Deb closed her comments by saying, “I’ve enjoyed my four years here and met so many terrific people. It’s been interesting.”