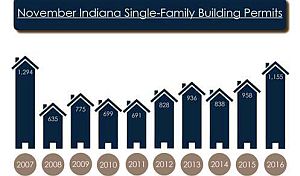 Single-family building permits in Indiana increased 21 percent in November compared to the same time last year according to the latest data from the U.S. Census Bureau and the Department of Housing and Urban Development. Permits decreased nine percent in November over the previous month.

“November is the tenth consecutive month that single-family building permits in Indiana have risen compared to the previous year,” said 2016 Indiana Builders Association President Jim Pressel. “A solid job market and a growing economy have spurred this growth, and we expect that upward trajectory to continue into next year.”

Builder confidence in the market for newly-built single-family homes jumped seven points in December to a level of 70 on the National Association of Home Builders/Wells Fargo Housing Market Index (HMI). This is the highest reading since July 2005

“The rise in builder confidence is consistent with recent increased economic improvement and consumer confidence,” said Pressel. “At the same time, builders remain sensitive to rising mortgage rates and continue to deal with shortages of lots and labor.”

About the Indiana Builders Association

The Indiana Builders Association (IBA) is a statewide trade organization representing Indiana’s home building, remodeling and light commercial construction industry. Established in 1952, IBA has 27 local affiliates organized into nine geographic areas across Indiana. IBA, along with its affiliates, are associated with the National Association of Home Builders in Washington, D.C. The organization works to educate its members, the general public, elected officials and regulatory bodies to maintain and develop workable and affordable regulations and laws that enable the citizens of Indiana to own a home. More information can be found at www.buildindiana.org.