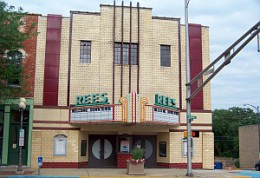 It appears that next year Santa is going to have a much larger workshop right in downtown Plymouth.  By all predictions, a 14,000 square foot one, the result of a Christmas gift this year to the Community which allows for the transfer of a treasured landmark, the Rees Theater, from private ownership to the status of not for profit during the first quarter of 2017.  The Marshall County based Wythougan Valley Preservation Council unanimously voted at a special meeting held on the 7th of December to be that receiving unit which set plans in motion to preserve and restore a most notable feature of Plymouth since 1939.  Many Elves have been put to work for this transfer to now occur just after New Year’s Day.

For this particular couple, their gift also preserves a storied past for a building that was built in 1865 for Amzi Wheeler.  The three story brick and mortar structure served as both retail and office space for nearly the next 75 years.

However, what happened in 1908 at that location is of great importance to this particular couple.  It was that year when businessman and City Alderman Charles R. Leonard moved his family’s business of 29 years, a carriage and undertaking firm, from its West LaPorte Street location to 100 N. Michigan Street and established C.R. Leonard Furniture and Undertaking.  In 1919 ownership transferred to Ralph and Halleck Johnson, becoming known as Johnson Brothers Furniture and Undertaking.  In 1928, Ralph and son, Francis W. “Barney” Johnson, decided to create Marshall County’s first ‘funeral home’ and moved to the former Xaver residence at 1100 N. Michigan Street, where it operates today as the Johnson-Danielson Funeral Home.

Current owners of the now 137 year old business are Randy and Eleanor Kacmar-Danielson who made this gift with the intent of honoring many lives over the course of history who ultimately made this gift possible.  “The Marshall County Community has for generations placed their trust in this funeral service provider and we are humbled to be its steward for the past 22 years”.  Danielson stated and continued; “This landmark like so many others has such a storied past that we wish to pay tribute to those visionaries who created and maintained it along the way.  Most importantly today the current owners; Jim and Judy Vinall and Brian and Lori VanDyne who in 2013, as business owners themselves stepped forward and assumed ownership of the building to assure its preservation throughout its vacancy.  In that time they have performed structural repairs and maintained heat during those many years which has led to the building’s integrity we see yet today.”

After the furniture and undertaking departed from the VanVactor building as it had become known in the 1930’s, it was only partially occupied and was looked upon as an ‘eyesore’ until Stewart Rees approach renowned local architect, Alves O’Keefe.  He had built many large volume structures, mostly churches but also one of the most beautiful and well planned funeral homes ever constructed in the State of Indiana, the Bluffton firm of Thoma/Rich Funeral Home in the mid 1960’s.  Ironically the upstairs apartment of that funeral home became newlyweds Randy and Eleanor’s first established home.  “I enjoyed a portion of my career working there and admired that structure’s attention to detail and do so yet today.  In fact, elements of it were duplicated in the remodeling of our funeral home here over the years.  So, I know firsthand that anything Alves laid his thoughts and hands to would also be that of long standing integrity,” stated Danielson.   “Unfortunately Alves and his wife would not personally see the completed funeral home in Bluffton as they were both killed in an auto accident near Rochester while returning home from a trip to Florida to attend the Bluffton funeral home’s open house.”  Johnson Funeral Home performed their services.

Alves had set his eyes on the VanVactor three story corner building and could envision its transformation into a modern day theater with a vogue art deco design that would rival any theater of its size in the Midwest. It would have the first ‘cry room’ of any theater in Northern Indiana and seat 600 people.  But, in its present state the building was not only too large north to south but too tall as well.  He could see using the southern two-thirds of the building for a theater and the north third remaining independent as we see it today operating as NaRie Simple Treasures.  The third floor was dismantled using only manpower, the floors removed and a formed in place native timber truss system designed to span the open auditorium.  After only seven months of work it opened on schedule and within a budget of $75,000 on February 1, 1940 with the glitz of headliner movie; Remember The Night, starring Barbara Stanwykc and Fred MacMurray.

As children we remember Mr. & Mrs. Weatherhead who were so dedicated to managing the theater.  It remained in operation until 2006 when multi-screen theaters made many single run theaters across the country cease operating as well.  The last 21 years the theater was owned and operated by the man and wife team of John and Gwen Hoesel.

In 1998, a complete re-build of the marquee was put in place and could remain safely operational today.  In the short scheme of things it is this marquee’s impressive evening presence that the Danielson’s wish to see operational and enhance the downtown streetscape as early as this summer.  This was a suggestion by a group of Lincoln Junior High School’s 8th grade students in a 2015 presentation.

Wythougan will be instrumental in helping secure grants that are regularly available for this type of restoration.  Danielson serves on the Architectural Design Committee of Discover Plymouth, a Main Street Program.  A project group is being formed that will guide the efforts at first, for the continued preservation and immediately seek insight from the public as to how this space might best function for the future pleasure of generations to come.  These discussions can begin to take place on Facebook sites like:  Rees Theater, Discover Plymouth or Downtown Plymouth Roundtable.

In conclusion Danielson shared this; “We are encouraged by the many great things that are happening throughout this Community.  Through a collaborative effort, we can lend support and continue this momentum forward, which is best accomplished by sharing our ideas with the City Administration and councilmembers regardless of our personal and political convictions.  Every day I encounter more people who are willing to give of their time, talent and treasures for the betterment of Plymouth.”

It is reminded that this is not a Regional Cities Project, nor is it one solely for the City of Plymouth.  It is one that the people of this Community will need to financially support in order to take it forward. Additional donor gifts may be presented to the Wythougan Valley Preservation Council – Ree’s Project, 123 N. Michigan St., Plymouth, IN  46563.

Press release provided by the Danielsons