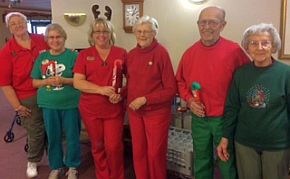 Staff and volunteers of Miller’s Assisted Living Community hosted the annual RED & GREEN Party on Friday, Dec 23rd in the facility’s Oak Hill Café.  The party began with the annual Red & Green contest with first place prizes awarded to the person/s wearing most red, the most green and a combination of the most red and green.  Audience applause helped select the winners.

Following the contest, Dietary Manager Angie Rice shared an excerpt from “The Grinch Who Stole Christmas” by Dr. Seuss and a poem titled “My First Christmas In Heaven” (author unknown).  Other staff sharing during the party were:  Carol Michael, Deb Shock and Brenda Moreno telling Christmas jokes; Christina Tolson creating a Frosty The Snowman Mad-Lib using words suggested by the residents in attendance; and Lorie Sauer, Resident Service Director reading “Poor Ole Hercemer” which is an original Christmas Book written by her mother, Wanda Lee Magnuson Lemert in 1964.

Staff and volunteers (Juanita Stapan, Phyllis Wright and Lyn Ward) aided residents in selecting refreshments from the delicious array of homemade delicacies treats supplied by staff when an unexpected guest arrived.  Santa (Daren Morgan) and his #1 Elf (Dorothy Morgan) arrived on the scene led by Mrs. Claus (Deb Bush).  Santa and his helpers greeted each resident individually and passed out treats to all in attendance. 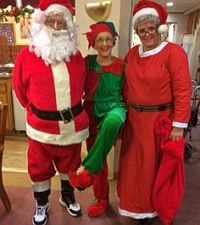 The festivities came to a close as Activity Director; Cindy Flagg read the story of the Birth of Jesus using Scripture from Luke 2:1-19.  She then invited staff to join in singing “We Wish You are Merry Christmas” to all residents and guests.  The residents reciprocated by singing the same back to the staff and thanking them for a wonderful party.