Delp Resigns City Council Seat, Mayor Give Him Key to the City 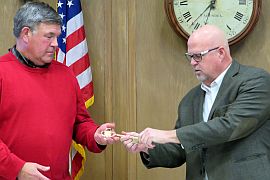 Delp read a letter of resignation during the meeting that was effective at the close of the meeting.  His resignation was necessary because in November he was elected as County Commissioner beginning in 2017.

Mike took time to thank several people, including his wife Judy who has been his sounding board for the past 9 years.  Delp also thanked the citizens who elected him in the great community we live in, former council members he served with including Mark Neidig, Wayne Smith, Don Gardner and the late councilman Chuck Ripley.  He also thanked former Clerk Treasurer Toni Hutchings and current Clerk Treasurer Jeanine Xaver, former City Attorney Nelson Chipman and current attorney Sean Surrisi.

Mayor Senter read a proclamation saying, “His years of service have been marked by exemplary dedication for the best interest of the community.” The mayor noted his attention to face to face problem solving using good old Hoosier leadership.