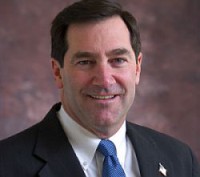 Donnelly, who serves on the Senate Armed Services Committee, said in part in a video message, “I’m proud to announce that President Obama has signed into law the third and final piece of my ‘Care Package,’ as part of the national defense bill. This legislation allows the military to expand the availability of physician assistants to provide mental health care at home and in the field.”

To see Senator Donnelly’s video message about his final “Care Package” provision, click the image above or click here.

Donnelly’s bill that became law today as part of the national defense bill is his Frontline Mental Health Provider Training Act. Given the shortage of mental health care providers, Donnelly’s provision allows the Department of Defense (DoD) to establish a pilot program to expand the availability of Physician Assistants (PAs) to provide mental health care evaluations and services for servicemembers and military families.

o   A provision that creates a special designation, and an online registry, for private sector, community mental health providers who demonstrate – either through training or past experience – a strong knowledge of military culture and evidence-based therapies for mental health issues common to veterans and servicemembers.