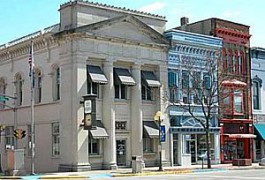 Last week members of the Plymouth Redevelopment Commission reviewed the existing list of project in TIF district # 1 as it relates to the possibility of funding a bond issue for a major renovation project for city hall with an expansion.

The project would include the acquisition of the Chamber of Commerce building with the possibility of having them stay on the main floor and the city expanding into the second floor to allow for a larger meeting room, new mayor’s office, addition of restrooms, upgraded heating and air conditioning and an elevator.  The project is estimated to cost $2.5 million for construction and related fees.

Redevelopment member Melissa Christenson who is on the commission as the school board appointment, and not a voting member said, if the commission’s task is for overseeing redevelopment and economic development how  is this renovation project would further the cause.

City Attorney Sean Surrisi said it has an indirect impact especially with keeping an anchor building in the downtown.  He also said it signals the city’s commitment to downtown.

The Redevelopment Commission approved an agreement with RQAW to continue with the project plans.